This is a major milestone to me – for so many reasons – but mainly because without the YouTube channel, Man Flow Yoga would likely not exist. Without the ability to get in front of somebody new, to walk them through a yoga posture or routine, to teach you something new that you haven’t done before, and to actually get you to try it out and feel the results for yourself in a straightforward, casual style, Man Flow Yoga would [most likely] not have lasted, and it certainly wouldn’t have reached the level of success that it’s had so far.

The Members’ Area, my book, Yoga Fitness for Men, the Body By Yoga DVDs, our yoga mats, and all the other awesome products that we’ve created, would not have been nearly as popular as they are now; would not have come close to the level they’ve reached without the Man Flow Yoga YouTube channel. 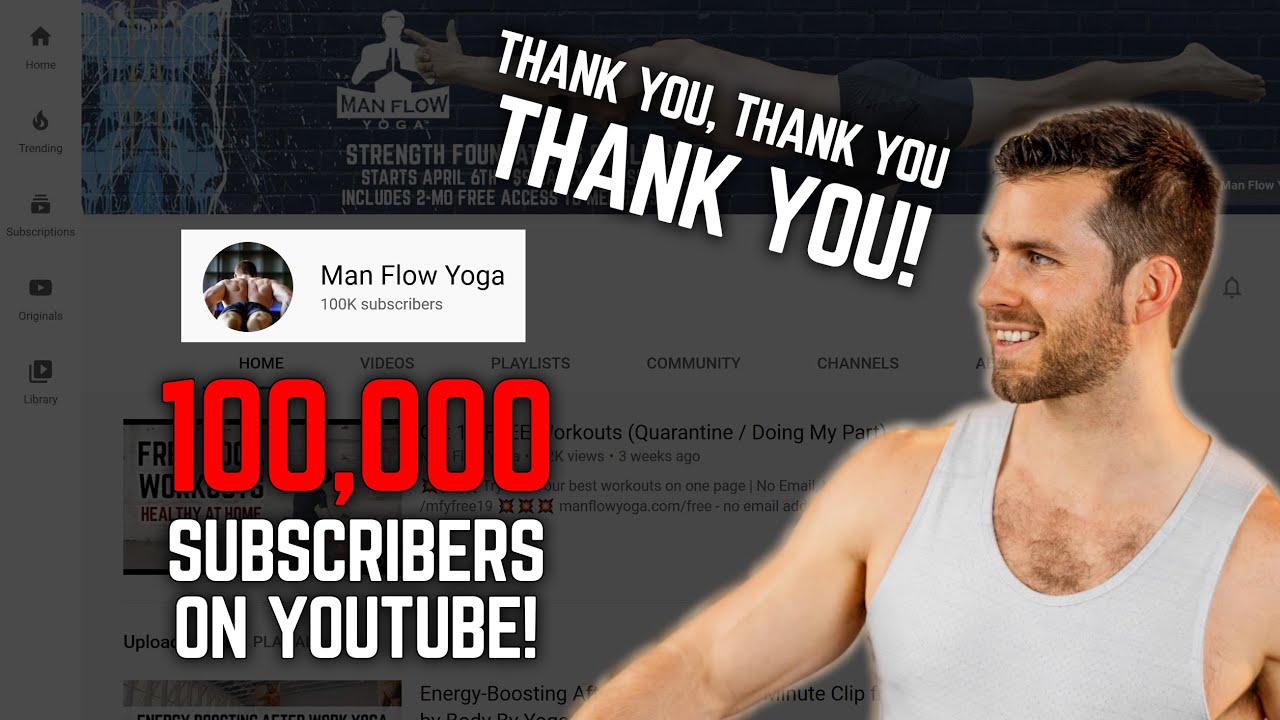 YouTube provides the opportunity to teach at my best

Video is my favorite medium. This is where I get the chance to share something useful, to simultaneously walk you and teach you something about yoga, exercise, wellness, motivation, or any of the other topics I’ve covered. More than that though, it means SO much to me that you actually stuck around and watched the video. With the infinite amount of options out there, I’m honored that you cared about what I had to say, and for that I humbly thank you.

You’ve sent me so many helpful messages, comments, and emails as a result of those YouTube videos. Over the years, I’ve heard from the people who have helped to shape Man Flow Yoga into what it is today. Without your feedback – even if it was just a “thumbs-up” or a view – I wouldn’t know what content you were finding useful.

Over and over, the feedback guided me toward this:

What was Man Flow Yoga helping you to accomplish? How did it make you feel? In addition to being effective and easy to follow, were the workouts manageable? Was I creating programs in a way that gave you the motivation to be consistent and do this for months (or years) in a row? Did the workouts make you think, “Hey, I CAN do this!”?

With your help, I think I’ve done a pretty good job.

I learned more about your personal struggles, the problems you really wanted to address, and WHO you were. When I started Man Flow Yoga, none of my assumptions about any of these things were correct. I thought this would be a way for people to get ripped, using yoga. And I quickly realized the mission was so much more important than that.

You wanted to be able to play with your kids and enjoy being a father. You wanted to get rid of pain that was preventing you from doing things you loved. You wanted to be more confident in the way you presented yourself, so you could be more successful in your personal and professional life.

And what it really came down to was this: Being physically capable of doing what you wanted to do.

Moving without pain. Feeling comfortable in your body on a day-to-day basis. Being able to do a workout that built up your confidence, instead of making you feel lost or inadequate. And without your feedback, I wouldn’t have known that. So again, I thank you!

More than just learning about you, it was also how other creators learned about me. The YouTube channel was led to so many opportunities which I would consider a great success.

The Body By Yoga Series

In May 2014, a guy named Paul sent me one of the longest emails I had ever read, saying that he was working on a series of DVDs for no-chanting, non-spiritual yoga, and he wanted me to lead it. Years of hard work and a few select DVDs later, we sell over close to or over 100 DVDs on a daily basis. We also created, designed and launched our own cork yoga mats, which are top-ranked cork yoga mats on Amazon. I’ve made 6 different DVDs! So far

In May 2017, I received an email from DK Publishers saying they were interested in me writing a book for them, focused on yoga for men. The editors specifically cited my YouTube channel as the major reason why they reached out to me in the first place. Stemming from the success of the YouTube channel, I was inspired to start creating products of my own. Sure, I could publish a free video on YouTube for views, but would people actually get their credit cards out and pay for them?

If you’re interested in starting a program with Man Flow Yoga but don’t know where to start, we got you covered!. Give our FREE 7-Day Trial a try. Sign-up below!

Despite my fears, my anxiety, and the fear of failure, you proved me wrong.

I was so scared that I would receive a flood of messages and comments complaining that my content was no longer free, that it wasn’t worth being paid for, and that you would be taking your eyeballs elsewhere. But you didn’t.

Most of the people I have conversations with – I would estimate 75% – are people who have actually purchased one of my products. And if you’re reading this and thinking “Well I haven’t bought anything yet” – don’t worry. It’s thanks to your views, your likes, and your subscription to the Man Flow Yoga YouTube channel that those products and those customers exist in the first place.

It was your attention on YouTube that gave me the confidence to create products, to move into those uncertain waters of realizing my self-worth, and being able to ask people to actually compensate me for my time and expertise.

It was your views and comments that allowed me to get in front of somebody who was looking for a training resource EXACTLY like Man Flow Yoga.

Of course, I have to give a special thank you to those people who have been able and willing to purchase Man Flow Yoga training resources – I wouldn’t be able to create content without your support!

So thank you, whoever you are. Whether you’ve been part of the Members’ Area for 3+ years, purchased a copy of my book, watched some videos on my YouTube channel, or this is your first time ever seeing me – thank you.

Thank you for giving me the opportunity to teach you something new, to give you a fun workout to follow along to, and for inspiring you to want to take care of yourself.

Most of all, thank you for valuing what I have to say. Personally, it’s the most rewarding feeling in the world to know that what I have to say is worth your time and your attention – especially considering the infinite amount of content you could be watching instead.

You might be interested in some tips on starting off your yoga practice, so read on! 3 blogs covering some basics. The Best Tips for Men New to Yoga Learn How Often You Should Practice Yoga Learn Why And How Yoga Builds Muscle