20 years ago, Vietnam Vet Jack Chew went in for a routine doctor appointment which changed the course of his life.

He didn’t suspect anything other than a routine appointment — until he got the news that he developed diabetes. Within minutes of hearing his diagnosis, his mind turned to his family. Diabetes surged through his family, attacking his aunts, uncles, and grandparents. 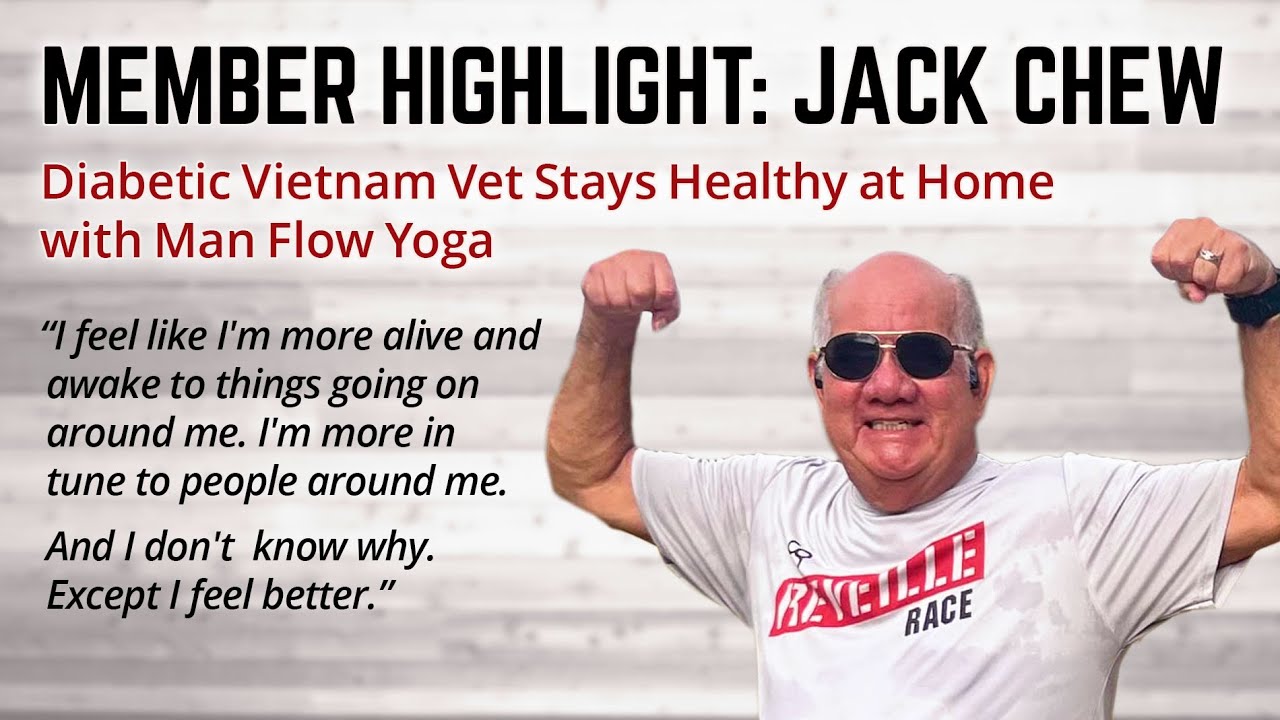 Every diabetic person in his family suffered extreme consequences — losing toes, developing ulcers, and even dying from the condition.

Jack didn’t want to end up drowning in pain and misery like he watched his family members suffer through. So he made some changes. First, he decided to swim every day. Then, he made the simple, yet difficult decision to cut out sugar from his diet.

Within a year after getting his diagnosis, he shed 100 lbs of fat from his body.

But during his quest, he realized there was an easier—and more effective—way to stave off the insidious effects of diabetes:

When your muscles are active, your risk of experiencing the worst from diabetes—like losing toes or developing ulcers—tanks. And while losing 100 lbs is nothing to sneeze out, the vast majority of people who experience such dramatic weight loss success gain it all back—or gain back even more weight—within a few years.

Jack did the hard work of losing the weight, but now came the harder work of sustaining his weight loss.

When Jack realized movement was the key to minimize the consequences of his diabetes, he became a gym rat. He went to the gym consistently for 8 years straight. And he not only shed any extra visceral fat on his body, but he also got his muscles in the best shape they’ve been in for decades.

But there was one tiny problem lurking behind the corner…

The pandemic was on its way, threatening to neutralize Jack’s incredible weight loss by depriving him of the gym.

Sure enough, gyms everywhere closed for as long as 5 months. Jack’s anxiety skyrocketed. He knew without his gym habits, his old, diabetes-inducing habits would start rearing their ugly heads again.

And so, he began searching for online alternatives.

That’s when, by fate, he found Man Flow Yoga’s strength and conditioning program.

But he decided to give Man Flow Yoga a chance — which became another turning point in the Vietnam Vet’s life.

Man Flow Yoga opened a lot of doors for Jack. Not only did it save him from reverting to his habits which caused his diabetes, but it also made him more flexible and open to trying different movement modalities.

Jack never considered himself athletic. Trying new moves or new sports frightened him, knowing an untimely injury would set him back.

Well, after being a member of Man Flow Yoga for two years, Jack can move better today—at 74 years old—than he could in his 30s and 40s.

Like anyone else, aging daunted Jack. Movement has become such a big part of his life — and he worried Father Time would snatch it from him. But thanks to his commitment to Man Flow Yoga, Jack’s still able to swim, run, and bike.

And you know what?

Jack’s still able to rock climb with his veteran’s group too. And he even keeps up with guys young enough to be his son!

But most important of all?

Jack rediscovered his purpose in life. He spends his free time inspiring amputee veterans and encouraging them to move.

As for how he feels?

I’ll let Jack say it in his own words:

“I feel like I’m more alive and awake to things going on around me. I’m more in tune to people around me. And I don’t know why. Except I feel better.”

But his movement journey hasn’t been all flowers and rainbows…

About nine months ago, Jack was doing a low Plank with a Donkey Kick. When he kicked his right shoulder, his deltoid tore. He could hear it ripping off the bone.

This was an injury he had before, 20 years prior.

But his deltoid injury—mixed with the lessons he discovered inside the Man Flow Yoga program—led to an epiphany:

He realized that his military training and high school gym classes led him astray when it came to push ups. For his entire life, he only used his shoulders, biceps, and chest to perform push ups — which could be the culprit behind his recurring deltoid tears.

Dean, the brains behind Man Flow Yoga, taught him a different way to do push ups by relying more on his back muscles.

Here’s what Jack says about this realization:

“It was absolutely an epiphany to me when Dean had that segment leading up to the yoga Push showing scapula engagement. And as I tried that, I remember so, so vividly the first time I tried to push up like that. There is so much power in those back muscles that I never used to do a push up.

“It was amazing to me. The phrase ‘put your back into it’ really, really struck home because that’s what was going on.”

Which leads me into Jack’s favorite aspect of Man Flow Yoga:

For the past 9 months, Jack’s been nursing his deltoid tear. He still struggles with different body parts, especially in his upper body and shoulders. But finding a workout he needs is a breeze with Man Flow Yoga’s library of content. He can find exercises that strengthen his injured body parts within minutes. And he doesn’t have to worry about overexerting himself or causing another injury.

Plus, he loves that he can do all the things guys his age aren’t supposed to do.

Today, Jack shares everything he’s learned by being a member of Man Flow Yoga with his veteran’s group — helping them stay fit, prevent injuries, and have fun with yoga.

Wanna brag to your friends and family about how well you can move (regardless of your age)?

Man Flow Yoga offers a FREE 7-Day Beginner’s Yoga for Men Challenge to help you get started. There’s no credit card required – just let us know where to send your lessons!

Click here to sign up for the Man Flow Yoga 7-Day Beginner’s Yoga for Men Challenge today (and see what just 15 minutes of yoga will do for your fitness!)