If you’re anything like Man Flow Yoga Member, Patrick Cobb, you’ve probably believed the widespread stereotype that yoga is for women, not for men. And each time you walked into a public yoga class, this stereotype was reinforced into your mind:

That’s how 58-year-old Patrick Cobb felt before trying Man Flow Yoga. And now, Patrick, along with every other Member of Man Flow Yoga, proves it’s okay for guys to do yoga.

Patrick, like everyone else on Earth, started getting cabin fever when everyone was stuck at home during the pandemic. He couldn’t go to his gym to lift weights or swim. The only meaningful workout he did before trying Man Flow Yoga was walking. And Patrick’s boredom started driving him mad.

Being cooped up in a house with nothing to take your mind off the nonstop negative news is a recipe for misery.

Luckily for Patrick, he discovered Man Flow Yoga one day while scrolling Facebook. As mentioned, yoga gave Patrick the heebie-jeebies. He was too intimidated to go to a public class.

And to make matters worse…

In 2007, Patrick suffered through a gruesome bike crash. A massive compound fracture broke his left elbow, which was replaced with a titanium rod. And 13 years later, the strength and mobility in his left side had still not returned to 100%.

But in an attempt to stave off his cabin fever and regain his strength in his left side, he decided to join Man Flow Yoga in 2020.

When Patrick joined Man Flow Yoga, he started with the Yoga for Athletes and the Mission: Daily Yoga programs.

The first benefit Patrick noticed was the mental benefits. Not only did his Man Flow Yoga workouts occupy his time and thoughts, but it also gave him a way to decompress from his stress-filled days. He’d whip out his yoga mat in the afternoon, focus his mind on his stretches, and found himself less anxious and worried than he otherwise would’ve been. This also helped him get back into a regular routine after the pandemic disrupted it.

Shortly after making Man Flow Yoga a part of his daily fitness routine, he started noticing the physical benefits — particularly on the left side of his body.

His bike crash from 2007 didn’t just cause pain and mobility problems in his elbow:

His shoulder and ligaments in his hand also erupted with pain when he moved them the wrong way. And while lifting weights and swimming helped reestablish some strength in his left side, both paled in comparison to Man Flow Yoga.

In fact, the work he’s done inside Man Flow Yoga to reestablish his strength in his left side has also bled over into his strength training and swimming.

And that’s not all Man Flow Yoga unlocked for Patrick:

He also felt a wave of confidence wash over him in the gym. He was both physically and mentally stronger. Proving, yet again, that yoga is for both men and women. Men just need Man Flow Yoga instead of a public yoga class.

One of the biggest failures of modern society for men is that most men don’t have a tribe. Throughout human history, men had a community of other similar men to share their glory, losses, emotions, and struggles with.

Look around in 2022 and almost no men belong to a tribe or community.

Every Member gets an exclusive invite to a Facebook Community with men all over the world wanting to work on their fitness level. Each person in our tribe is committed to improving themselves. Members coach and mentor other Members. We solve problems and crises together.

And unlike working out in a group class or with a personal trainer, Man Flow Yoga gives you full flexibility to work out when you want.

You don’t need to be in a class at a certain time. And Patrick, like many other Man Flow Yoga Members, uses this to his advantage.

Some days he wakes up early and starts his day off with a 30-minute Man Flow Yoga routine. Other days, he’ll do it in the middle of a hectic day. Or use it as a way to calm his body and mind at night, before bed.

And Patrick loves that he can do Man Flow Yoga routines anywhere. If he’s traveling, he’ll load them onto his phone or iPad, so he sticks with his routine. If he’s crunched for time, he’ll do a shorter routine.

Patrick’s been a loyal Member of Man Flow Yoga for the past two years. He rarely misses workouts — and he’s a stronger, healthier, and happier man because of it.

So, I’ll leave you with a few words from Patrick: 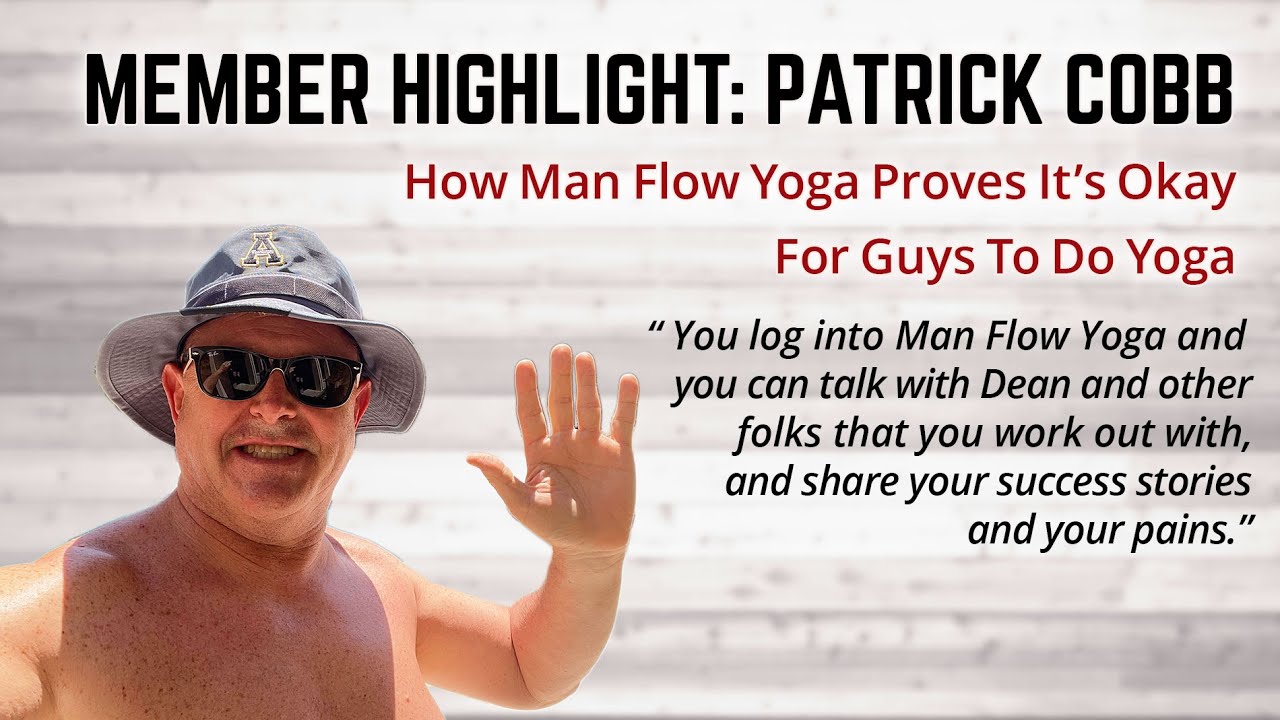 Are You Ready To Try Man Flow Yoga Yourself?

If you want a yoga program designed for guys (without the fear factor of going to a yoga class full of ladies), I want to give you a free 7-day trial to Man Flow Yoga:

There’s no credit card required – just let us know where to send your lessons!

Click here to sign up for the Man Flow Yoga 7-Day Beginner’s Yoga for Men Challenge today (and see what just 15 minutes of yoga unlocks for your fitness!)

Already a Man Flow Yoga member? Share your story with other men like you by booking a Member Stories call at  https://manflowyoga.com/member-highlights-signup.