“Before [Man Flow Yoga], I would practically dread having to bend over. [M]y first goal when I joined the program was to be able to tie my shoes without feeling like I was going to pass out. [Now], pigeon pose and an extended leg reach are my favorite bar tricks.”

Mike Hensley recently celebrated his 40th birthday, and his one-year Man Flow Yoga anniversary. Before Man Flow Yoga, Mike felt much older than his age. Even though he wasn’t even in his 40s yet, he felt like an old man.

He dreaded bending over. Tying his shoes made him feel like he was going to pass out. Reaching for the bottom shelves at grocery stores was an impossible task. He avoided the gym, in large part, because he feared he wouldn’t be able to lift dumbbells off of the ground. Needless to say, Mike’s inability to bend over took a toll on his well being.

Well, that started to change when he joined Man Flow Yoga.

Not only does he surprise himself when he picks up weights off the ground at the gym, but pigeon pose and extended leg reaches have become his favorite bar tricks. A 40-year-old man isn’t supposed to be as flexible as Mike (especially considering his lack of flexibility just a year ago), and it’s a hoot to anyone he demonstrates it too.

Unlike many Man Flow Yoga Members, Mike has been interested in yoga for a long time.

But he never found a program that resonated with him:

Most of the yoga classes and programs he joined were filled with too much spiritual, hippy-dippy nonsense. The others he found came across as total BroYoga™️, which equally rubbed him the wrong way.

Mike’s original intention behind joining Man Flow Yoga was to become more flexible and mobile. But he’s tried many other yoga programs in the past, and could never stick around because they turned him off. It was either instructors getting him to align all his chakras and find his heart center. Or Bros yelling at him throughout the entire routine.

But he knew immediately after signing up that Man Flow Yoga could become a long-term staple in his fitness routine.

He instantly connected with the methodology behind Man Flow Yoga!

Since he’s tried several other yoga programs, Dean’s instruction style stood out like a sore thumb.

His matter-of-fact, practical, clear, and most importantly, useful style of coaching has helped him stick with his yoga routine. In fact, Dean’s instruction style has helped him in other areas of life too:

As Mike says in his own words:

“I’ve really noticed improvements in my performance while using Man Flow Yoga, especially when it comes to form during weightlifting. Dean has a really great ability to give you physiological cues that are practical outside of yoga.”

As mentioned, Mike joined Man Flow Yoga for the mobility and flexibility benefits. He stuck around because he loved Dean’s coaching style and methodology. And the longer he consistently practiced Man Flow Yoga, the more unexpected benefits he realized:

One of the first unexpected benefits Mike noticed was that he accomplished his personal goals with relative ease after joining Man Flow Yoga.

By joining Man Flow Yoga, Mike has a place to return to daily and build consistency. These traits bled into other areas of his life too.

Since joining Man Flow Yoga, Mike isn’t as burdened down with mental stress, overwhelm, or anxiety.

Instead, when those feelings rear their ugly heads, Mike hears Dean reminding him to breathe. When he runs into frustrating situations at work, he breathes through him, eliminating overwhelm and stress almost instantly.

He gets through tough times unscathed, and comes out successful!

Another saying Dean repeats that has stuck with Mike and seeped into other areas of his life is, “embrace the suck.”

Whether Mike’s in a tough yoga pose, enduring a difficult workout in the gym, or feeling overwhelmed in his personal or professional life, he remembers to embrace the suck.

This gives his mind space—which quiets his inner voice convincing him to give up. Each time he pushes past another experience that sucks, he builds confidence and his inner voice grows smaller.

Today, he’s a happier, healthier, and more flexible version of himself.

What Are Mike’s Favorite Parts About Man Flow Yoga?

Besides everything I already mentioned, Mike loves the Man Flow Yoga app. The calendar scheduling feature keeps him consistent, engaged, and confident. He loves that it reminds him of an upcoming session, and that he can see the chain of consistency of the sessions he’s done. Plus, he uses the journaling feature under routines he’s done, so he knows if he conquered it with ease or needs to focus more on a particular body part.

Mike also loves how each program is tailored to a specific problem. This makes it a breeze to find a workout video or program, and start to correct any problems before they rob him of his quality of life.

Thanks to the app, he doesn’t have nearly as much stress or anxiety because he always knows which workout video is up next, instead of having to mentally keep track of every video and program he wants to do.

Unlike the other yoga programs Mike tried in the past, Man Flow Yoga is practical. There’s not a lot of fluff. Dean cares more about giving useful instructions than feeding his own ego. And, as mentioned, Dean’s instruction style has helped him in every other aspect of his life.

Mike’s always quick to convince his friends and family to try Man Flow Yoga. Remember, just over a year ago, Mike couldn’t tie his shoes without losing his breath and almost passing out. Today, he’s (almost) as flexible as a cheerleader.

But it wasn’t always that way…

That’s why Mike advises anyone looking to try Man Flow Yoga to just start. Everyone has to start somewhere. And no matter how flexible and skilled they seem today, their Day 1, like his, felt awkward, bumpy, and difficult.

But by sticking with it, he’s not only improved his yoga technique (and his lifting technique for that matter), but he’s gotten into a groove where it’s a part of his life. In fact, when Mike doesn’t do his daily yoga routine, he feels like something is off for the rest of the day.

He’s stuck with it and he couldn’t be happier about that decision.

And you know what?
You’ll have the same sentiment too, a year from now, if you sign up for Man Flow Yoga today. 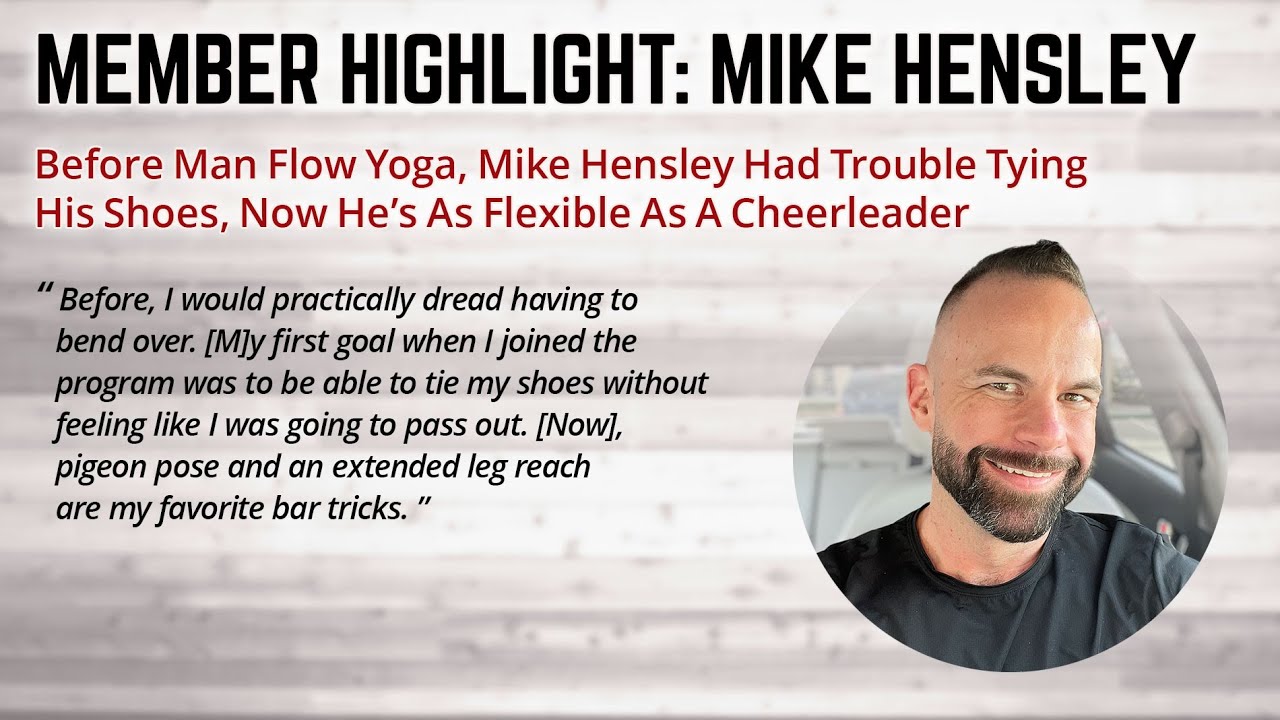 Ready To Try Man Flow Yoga & Become As Flexible As A Cheerleader?

If you want a yoga program that frees you from stress and eliminates your aches and pains, you can start your free 7-day trial to Man Flow Yoga:

No credit card, yoga experience, or flexibility required — we just need your email address, so we know where to send your lessons!

All it takes is 15 minutes of Man Flow Yoga a day to unlock the same benefits Sebastian unlocked!

Already a Man Flow Yoga member? Share your story with other men like you by booking a Member Stories call at  https://manflowyoga.com/member-highlights-signup.